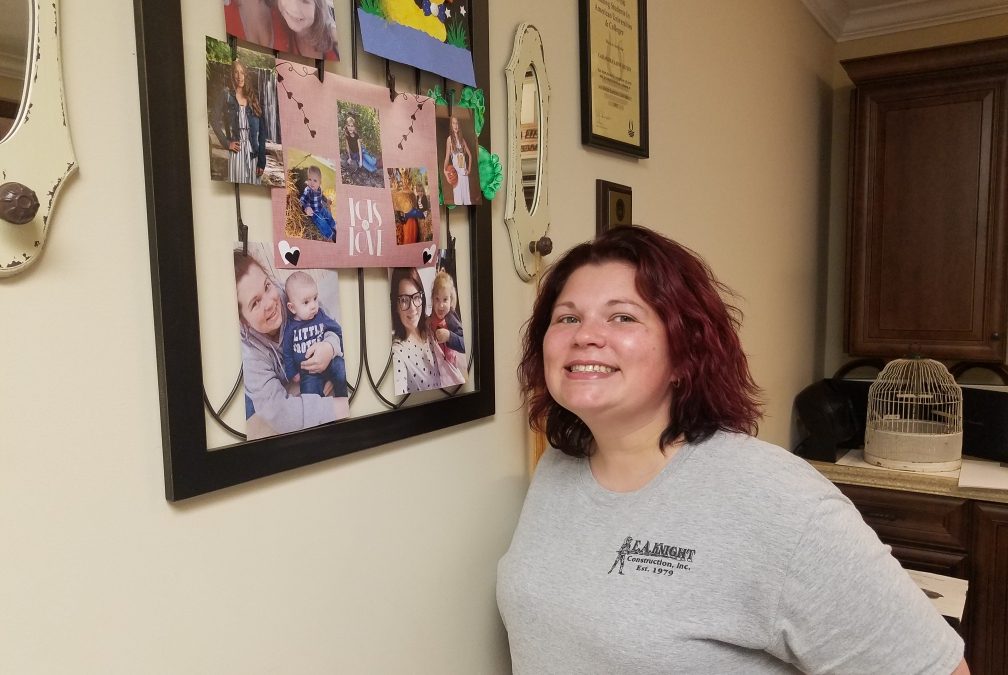 The first thing you notice when you walk into Cassie’s office is the three file organizers on her desk.  Not a single slot is open on any one of them!  Each file represents a certain job and each organizer represents the progress she’s made on the file.  Regardless, Cassie clearly had a lot of work to do, but made some time to sit down with me for a talk.

Cassie Oetjen has worked at E.A. Knight Construction since 2010, but that wasn’t her game plan early on.  A graduate of Marion High School and shift manager for five years at Pizza and Pasta Express in downtown Carterville, she somewhat fell into working at E.A. Knight Construction on accident.  Cassie was studying Criminal Justice and Behavioral Science at John A. Logan College/Missouri Baptist University when the May 8th storm hit in 2009, leaving the company with loads of damage repair jobs, and for that unfortunate reason, business boomed.  E.A. Knight Construction needed someone to answer the hundreds of calls we were receiving over those weeks, so Cassie stepped in to help her mom out, Gayann Griggs.  Over time, she finally became a full-time employee, which she says officially happened in April of 2010.

As time progressed, she began to visit jobs with the owner, Glen Knight, to see how he evaluates a job and assesses what needs to be done to complete a project.  This morphed into a dynamic in which Glen goes out and assesses the job and Cassie does a significant amount of the pricing and customer interaction.  You’ll likely see Glen first about the project idea, then talk to Cassie frequently to ensure all the products used in your project are exactly what you want and used the way you want them.

Like many of us, Cassie enjoys many aspects of her job, yet there are other things she’d be happy without.  What she likes?  The math!  I was excited to hear this because I love math also, as she uses it frequently when trying to make costs work for the customer.  She does a lot of solving for X and Y and with bits of geometry sprinkled throughout.  She could do without the phone calls though, which I also relate to.  Those files on her desk that I mentioned before can’t get finished efficiently when she keeps getting interrupted, but it’s part of the job, and this she accepts… somewhat.

Speaking of toddlers, Cassie has three kids of her own, and they help round her out as an individual.  The three of them keep her active and playful, which is great because Cassie has always loved sports, especially volleyball.  If you’re lucky, you can catch her in action as she coaches her oldest daughter’s volleyball team.  She also enjoys antiquing, but the way her face lit up when she started telling me about her different discoveries shows “enjoy” isn’t a strong enough word.

Cassie is “just a busy mom of three,” who works hard and has more than 10 years of projects to show for it.  If you plan on using E.A. Knight Construction for a future project, you can look forward to working with her, among the rest of the office staff and carpenters!