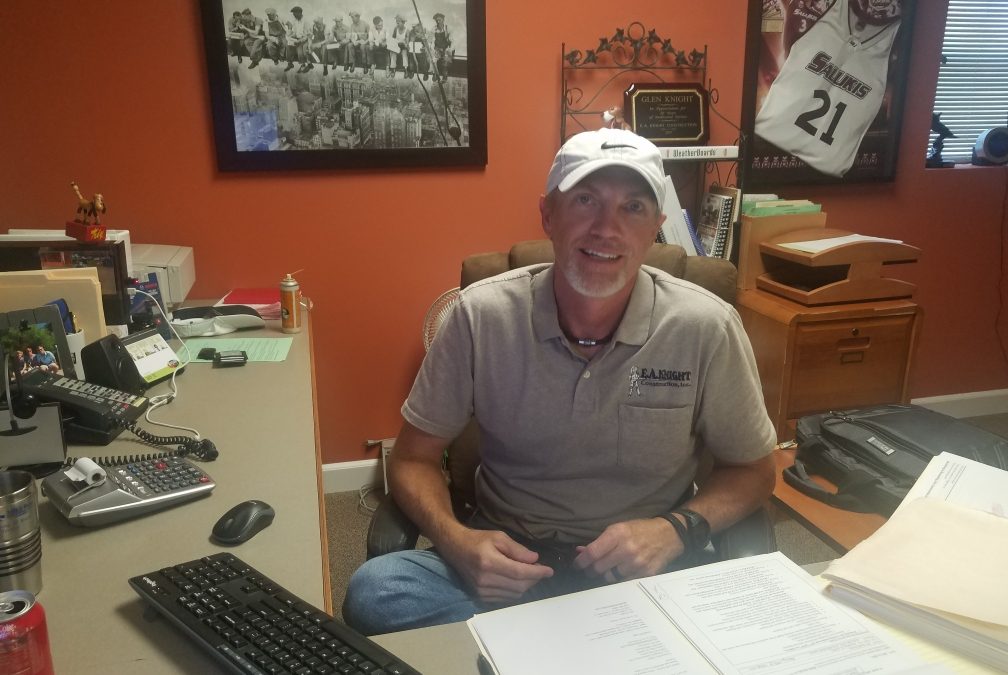 Glen Knight, the heir to the E.A. Knight Construction throne, didn’t grow up dreaming of becoming a successful contractor as a child, and really hasn’t to this day, but that doesn’t mean he takes what he has for granted. Some things just happen for a reason.

As a young kid, Glen grew up playing sports… no, he grew up living sports.  All he wanted to do was field a baseball, dunk a basketball, or be on the grid iron.  Sports were all-consuming at the time, and though that competitive nature is no longer all-consuming, it is still at Glen’s core.  He eventually graduated high school to attend Harding University where he played for the baseball team, briefly.  As he was warming up for a game his Freshman year, he tore the ACL in his knee, ending his athletic career for good.

For those that grow up in athletics, sports are huge in the development of a young person because it instills a competitive nature and a drive that otherwise would be hard to cultivate.  When Glen lost sports, he had to find something else to put that energy into, and his academic transcript thanks him for it.  Glen’s grades started to improve, and improve they did until his parents, Edd and Glenda, received a letter from the dean at Harding University.

“Whatever the dean says I did, I didn’t do it!”  This is what Glen said whenever he found out about the letter, or so Edd says.  (Edd likes to embellish a story, so who knows what in the world actually happened.)  Glen had made the Dean’s List, to his surprise and his parents.

Eventually, Glen graduated with a Human Resources degree and a handful of those letters from the dean and moved to Texas.  Then to Mississippi. Then to Memphis.  This was when he answered his true calling: working as a polyurethane salesman.  Of course, that’s not totally true, because when the polyurethane job started to feel permanent, Glen felt he needed a change, as did his wife, April, who was an elementary school teacher.  So, Glen called his dad.

Edd pounced on the idea of having his son home, working with him every day, even if it was only temporary while Glen looked for other work opportunities.  Glen moved back to Southern Illinois and began work, but his human resources degree didn’t equip him with the skills to be a contractor.  That’s when the drive within showed itself, as he was determined to be great at his job.  He couldn’t accept anything less.  It was in 1999 that he began carrying the torch.

Now, it’s 2020 and Glen Knight is the owner of E.A. Knight Construction.  The move back to Southern Illinois was never meant to be permanent, but since then, he’s raised two children, one being myself and the other being Caleb Knight, and because of us, he thinks the move was a good choice.  Southern Illinois has its pros and cons, but one pro is it’s a great place to raise kids.  At least, for us it has been.

Since Glen moved back, the company is nearly unrecognizable from what it was before he started work.  Glen learned quickly and became the most well-known face for E.A. Knight Construction, despite maybe the original E.A. Knight.  Since his taking over as the owner of the company, E.A. Knight Construction has earned several state and national awards, something he’s very proud of.  Glen worked hard to marry the two jobs of being a contractor and salesman together, which has helped expand the company in ways it had never grown before.

Some things just happen for a reason.