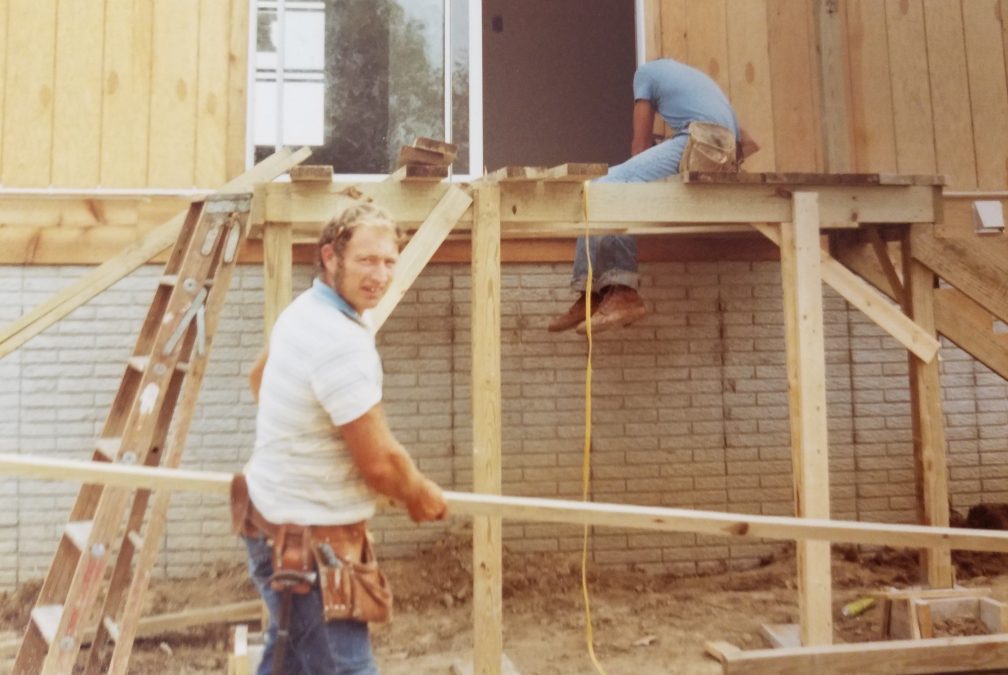 This blog is a continuation of last week’s blog, so you ought to read that first if any of this doesn’t make sense.  On we go.

Eddie A. Knight was now a legitimate contractor, and his own boss.  The Man! he probably thought.

Indeed, he was the only man when E.A. Knight Construction first started, and this posed a problem.  He needed employees.  An employee.  Construction is a difficult job that requires a fine mix of a solid work ethic, the ability to work long hours of labor, the refined eye for aesthetics, and the ability to create beautiful work.  No other person can match Jim Barker as far as Edd is concerned.

Remember the high rise that E.A. Knight Construction was tasked with finishing, way back in ’79?  At the same time, Edd was working on building a 40-unit apartment complex next to the high rise with a man named J.C. Smith.  One of Smith’s carpenters had asked Eddie if he would need help starting up this new company, meaning a first employee.  When my grandfather said yes, he was referred to Jim Barker.

“Jim was not a flash in the pan, you know.  He just come plodding along,” my grandpa said, patting his hands on the table to mimic Barker’s gait.  But when Eddie tasked Barker with hanging the baseboard for the 40-unit apartment building, Barker went on without a complaint.  For those who don’t know, much like myself before I started interviewing Eddie, hanging baseboard requires several hours of crawling on your knees, trimming baseboard for nearly the entire perimeter of the building.  It isn’t a task that’s highly sought after since you’re bent over for hour after hour.

Edd said to Barker, “‘Fine, well, why don’t you go… start back there puttin’ baseboard down.’ Well, he started back there when I had guys working up here, pullin’ their hair out and whatever [from their work], and I had kind of forgotten about him for a couple days.  I went back there, and he was just doing a fabulous job of trimming those baseboards out.  I said, ‘Oh jeez, you’ve been on your hands and knees for two days.  Do you want to hang doors or something?’  He said, ‘No, this is fine.’  He trimmed out the whole thing… He was tough.”

It was then that my grandfather hired Barker.  My grandfather would pick him up for work every day for the next several years after 1979, tell him the same joke, to which Barker would always laugh, then they’d set off to build beautiful work all over Southern Illinois.  Of course, my grandfather never forgot him on a job again.  If he did, he hasn’t shared that story yet!  That began the 30+ year professional relationship, and even longer friendship, until Mr. Jim Barker’s passing in 2015.

I hope you’ve enjoyed this.  I’ve attached Mr. Barker’s obituary at the bottom of this article so you, too, can see why he meant so much to us.